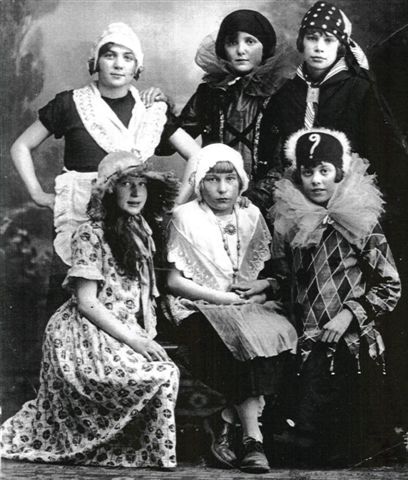 HISTORICAL ASPECTS OF THE MAASTRICHT CARNIVAL

From 1957 to 1963, I went to Saint Francis' primary school in the Maastricht city district Nazareth. For us, carnival didn't begin earlier than one week before Ash-Wednesday. Then the schoolmaster set out to teach us the new carnival song in Maastricht dialect. I remember, amongst other ones, a song about the dustmen who went on strike. My mother stitched cowboy fringe on our trousers and buyed new snapcap pistols. The old cowboy hats were still lying in the loft. So we were soon ready for the school carnival at Saturday afternoon. On Sunday morning, we went to watch the big carnival procession. Shiplike carts depicted topics of the day, like Belgian Congo, and funny individuals seemed to dance about with turds in their nappies. During the next two days, all children were free from school and playing at cowboy and red indian. At Ash-Wednesday, Lent began and carnival was over.
I didn't spend my puberal period in Maastricht, but my children did. My daughter went to the carnival festivities as a geisha or a samba dancer, together with her girl friends. Much to my grief, the feasting lasted all day and a large part of the night. After carnival, she was always ill. Nowadays, she's got enough of carnival, and flies from the city in good time. 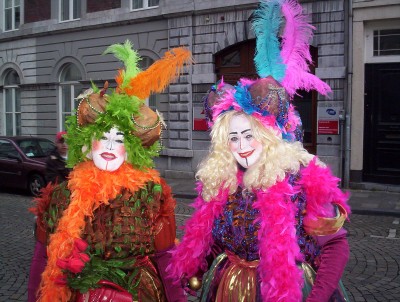 Sober outsiders can't easily understand what's up. Where the hell does this folly come from? I read up the subject in the literature. Apparently, carnival is at many places all over the world, but not nearly everywhere (in the northern part of the Netherlands, it comes under the 'popish naughtiness'). Moreover, there is no close likeness in the way the festival is celibrated. For example, there is a big difference between the excessive summer carnival of Rio de Janeiro and the old Brabant country wedding. The origin of carnival appears to be mainly threefold:
First, the Roman Saturnalia, Bacchanalia, and Lupercalia. These were fertility rituals connected with the succession of the seasons. The slaves and women were allowed to boss it for a while, or had to endure even more hardships. Second, the Germanic-Celtic pendants of the Roman festivals. These were also linked up with fertility, and hence with death: for instance, the Wild Chase represents a procession of slain warriors, led by Wodan. (This gives me a nice idea: go to carnival as Wodan, the one-eyed supreme god with a wild beard, a soft hat and a wide mantle on, on a white horse, flanked by two ravens.) Third, the ecclesiastical folly festivals. These held a reversal of normal hierarchy as well. Since medieval times, the Church has gradually substituted Christian counterparts for the old heathen customs. Accordingly, Shrove Tide was the last occasion for pleasure before the beginning of Lent.

The Dutch words for carnival are carnaval and vastenavond. There are two possible explanations of 'vastenavond': First, it can be understood as 'Fast evening', meaning the eve of Lent. Second (as in the German word Fasnacht) it can refer to the Indo-European word stem 'pes', and our word 'penis', and thus to fertility. For the word 'carnaval' there are three explanations from Latin: First, carnevale - meat farewell, referring to the approach of Lent. Second, related to the first, carnelevare - to abolish the meat. Third, carrus navalis - ship cart, and that's something quite different.
The ship cart appears in fertility festivals from Norway to Greece since pre-Christian times. Some historians think the ship cart of carnival is a remainder of the old Indo-European cult unions of men. Other people consider it as a parody of the Ship of Saint Peter, that is the Catholic Church. And that isn't improbable, either, because carnival has always been the festival of parody and reversed relations.
The carrus navalis appears early enough in the written history of Maastricht carnival: in 1133, a blue ship (on wheels) from Aachen arrived in Maastricht, dragged on by members of the guild of weavers, and continued its way to Tongeren. We have scattered reports about vastenavond in Maastricht from after years as well. But how came the modern carnival festival of Maastricht into being? 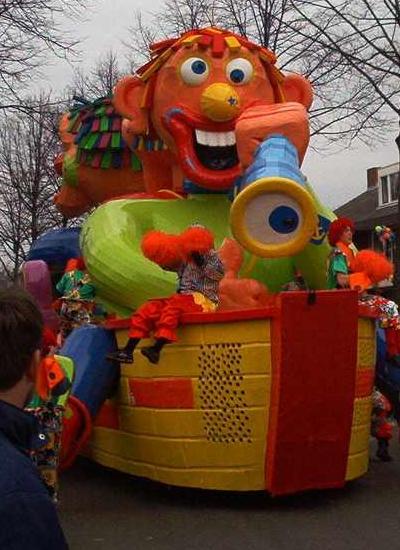 The retreat of a strict government to make place for a more lenient one, has always been an impulse for carnival. After the defeat of Napoleon at Waterloo, and the resulting Vienna Congress, there came room for a new corporate life 'for instruction and pleasure'. In the Rhine land, diverse carnival clubs were founded, and the newly chosen princes put on a fool's cap that was bearing an uncomfortable resemblance to a Napoleon's cap, placed crosswise. Of course, the alert Maastricht people didn't fail to notice this.
After the divorce from Belgium in 1839, some of them founded in Maastricht the Momus Society. During the one hundred years of its existence, this club organised many events in the fields of sports, charity and culture, among which also historical cavalcades on the occasion of carnival. At the eastern side of the beautiful square in the center of the city, the Vrijthoff, it bought the Momus house. They fitted the house up, basing all measurements on the number eleven. They adorned the front with the wellknown stone fool's head. The 1872 club rules speak of "really-fine folly, but not beyond the bounds of decency". Many humoristic orators gave addresses in Maastricht dialect, mounted on a winged horse. On this horse, called Pegasus, poets could fly reality. In the star constellation with the same name, they met with the eleven elves who brought them back to Mother Earth.

In the beginning of the twentieth century, the Big Carnival Procession was organised by the unforgettable pacemaker Alphonse Olterdissen, whose cast iron statue is standing in the Grote Looiersstraat. For the other activities, both in the open air and inside, there were special committees. The feast for high society was in stately halls, while lower society would feast in the streets and pubs. From 1936 on, more and more individuals would walk along in the carnival processions, and the burgomaster would meet with Prince Carnival in an official reception in the municipal hall. More often than not, some Ministers of the national government were present as well.
During the Second World War, the German authorities never allowed carnival, so it returned with new vitality after the war. Now the Tempeleers seized the reins. They choose a new carnival song, composed in Maastricht dialect, every year. They herald carnival with eleven shots of the old Momus cannon. They hoist up a big puppet, made of papier mâché, which represents their patroness, the Mooswief. This is the wellknown type of greengrocer's wife, whose stone statue is standing on Market square. She is guarding the festival from above. At the closing ceremony, the Tempeleers haul the puppet down again.
In the sixties, young people began to challenge authority all over the western world, and carnival in Maastricht developed even further. Soaked wind bands began to contribute quite a lot to the colourful street festival. 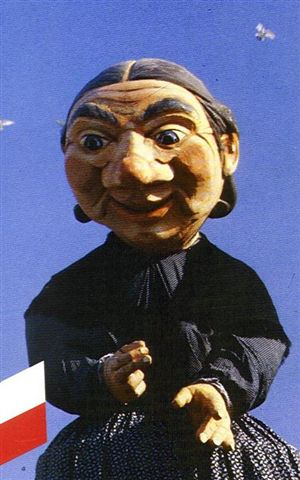 I spoke to an aged Maastricht inhabitant. How was carnival before the war? He told they used to pray for the poor sinners who couldn't behave. People who didn't grow up in Maastricht couldn't celebrate vastelaovond the right way. He himself took part in the organisation of both the religious processions and the carnival processions. For instance, he led a group of autobikes with wings, presenting a solution for the traffic problems on the old bridge. They could borrow things out of the Tempeleers storehouse, but had to do most of the job without help. Nowadays, people weren't patient enough to prepare a nice act. It was the task of a leader to minister to others. The pacemakers of carnival were often pacemakers of sports and youth work as well.
I was lucky enough to be allowed to speak with a very nice Tempeleer and former Prince Carnival. Friends with the Tempeleers had tricked him into the function of Prince, in the early eighties. In this function, he had to pay visits to all resthomes during several weeks. At vastelaovend, perfect strangers had unpacked their souls with him. Ever since, his broad fool's head beamed with festive joy. I inquired after the origin of the Maastricht carnival. He answered this was a mystery, and should remain a mystery forever. Now he was thinking about things important. The Tempeleers wished to proclaim our burgomaster the most thorough-going one in the Euregio, during a festal Veolia bus ride along the trenches in the inner city. It had to be a happening with esprit. Because esprit was the basis of the Maastricht Vastelaovond.

Maastricht history heavily influenced Maastricht mentality. First of all, we think of Catholicism: severe in theory, but mild for the confessant. Maastricht people know that the soup is not as hot when you eat it as when you dish it up. Second, we think of new rulers turning up again and again throughout the centuries. They come with awful war violence, proclaim severe laws, and depart to be replaced by a new ruler with other laws. The Maastricht people consider how to ignore the new rules without offending authorities. They played off the rulers from Liege against those from Brabant during many centuries.
To be able to live in this way, humour and practical jokes are indispensable. Maastricht humour is mild and doesn't violate the dignity of other people. Maastricht people will not boldly deny anything that an other person asks or says. They prefer to demonstrate in a subtle way they have an other opinion. And, for Maastricht, its dialect is indispensable too. No other city in the Netherlands cherishes its dialect in the same degree. This dialect is a 'sweet language' indeed. Both high and low society speak it. Momus and Olterdissen contributed quite a bit to this situation! 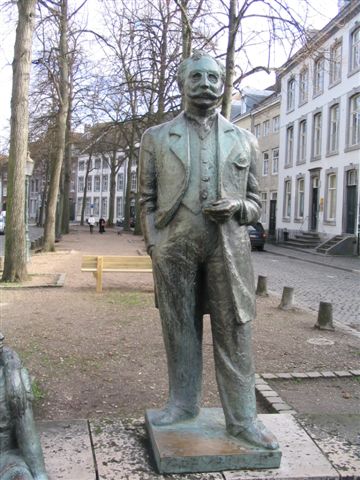 The Indo-European cult unions may be the forerunners of freemasonry, but not of the modern carnival clubs. Of course, it belongs to the character of men that they unite in such clubs, lest they are always sitting at home. There is a nice movie about this, starring Laurel and Hardy: Sons of the Desert. And we know that women like to dress up. Carnival is an excellent means for young men and women to contact each other in a virtuous way.
But I think, to explain carnival, a more important reason is: the opportunity to be creative among friends. I think of the costumes, the show carts, the puppets, the music, the speeches, the magazines, the comical acts, the organisation, etcetera. However, our Catholic writer Bertus Aafjes once formulated the most important reason: the opportunity to let the soul tread outside the body. This is quite unlike debauchery. When people from the north of the Netherlands come to celebrate carnival in Maastricht, they often make this painful mistake.
So, we can gather up the causes of Maastricht carnival this way: in old Maastricht, circumstances favouring the development of a strong carnival tradition were just exceptionally good. 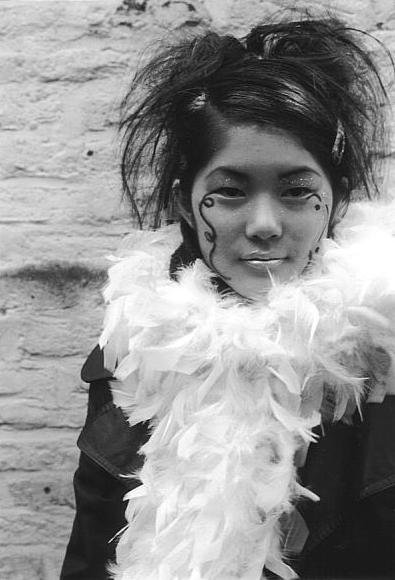