A message from heaven

In a little chapel next Saint Matthew's church in Maastricht, there stands a beautiful statue of virgin Mary. It represents la Vierge des Pauvres. As people say, this Virgin of the Poor appeared in 1933 to an eleven year old girl, Mariette Beco. It was in a hamlet called Banneux, in the Ardennes near Liège. The child had a sober and practical nature, but she went outside several times in the frosty cold to see her apparition. Mary led her to a water-spring 'for the sick'. This spring is Jesus: origin and end of all that is created.
In the same little chapel there is hanging a flyer, calling up participants for the yearly walking tour to Banneux on Christmas Eve. That tour is worth while indeed. You climb a hill toward the setting sun, as the three Wise Men followed the Star on their way to Bethlehem. The pilgrims flock together from far and near, to attend High Mass on the spot where Mary appeared. After Mass, they return home in buses, whose head-lights are blinding you all the time.
How reliable is the apparition? A Catholic dogma says that virgin Mary ascended to heaven with body and soul. She may appear to us in her transfigured body. After an accurate investigation of the facts, which lasted sixteen years, Rome decided we can rely on the account of Mariette. 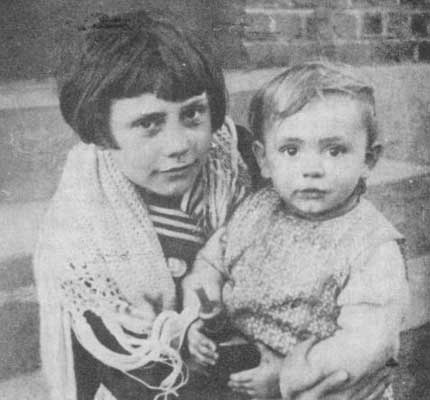 The Star of the Sea

Since the times of the Gospel, people were confident that, whenever virgin Mary appears, she wants to lead us to Jesus. This confidence is also revealed by the idea of the Star that leads the sailors to a safe harbour: "When storm's raging over the ship of my soul - my life is in danger of missing its goal - calm down, virgin Mary, the storm by your plea - and lead us to heaven, o Star of the Sea."
The most famous statue of the Star of the Sea stands in a chapel next the Maastricht basilica of Our Lady. The medieval woodcarver gave the statue of grace a form that suits her position as a powerful advocate with God: "Queen of Heaven, Mother of Mercy - our life, our sweetness and our hope, hail Mary! - To thee do we cry, poor banished children of Eve - to thee do we send up our sighs, mourning and weeping, in this valley of tears."
A noble man donated the statue to the Maastricht Franciscan friars when he entered their monastery. Ever since, many prayers have been answered, and the Maastricht people carried the statue through the city in many a procession. After the Dutch conquered Maastricht in 1632, processions were not allowed any more. The friars were banned from the city, but they returned in 1700. Meanwhile, the route of the procession was forgotten. People say the statue itself showed a pious woman the way, and the snow left on its mantle traces of the procession. People still walk this route through the streets virgin Mary indicated, every Saturday after evening mass. 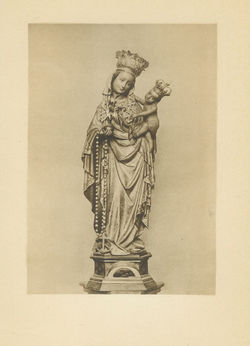 The legend of Saint Servatius

A solemn hymn celebrates Saint Servatius as the founder of Salvation in our region. This Armenian was placed on the Tongres episcopal see by an angel. During the council of Sardica, he put the heretics to silence who refused that Jesus is in essence God. In Rome, Saint Peter gave him a silver key of heaven. Shortly before his death, he moved the relics of his Tongres predecessors to Maastricht, to better defend them against the Huns.
This way Saint Servatius became the first bishop of Maastricht. At nearby Biesland he made spring a miraculous well, as a source of Christian life. One of his successors built a church on his grave, which was to develop into the present basilica. The German emperors of the Holy Roman Empire came there to honour our saint, and numerous pilgrims followed in their wake. The famous twelfth century poet Henric van Veldeke wrote his biography.
In the treasure room under the basilica, a precious chest of relics is being held in safe custody. This chest contains the relics of Saint Servatius: his chalice and paten, the bishop's staff, the silver key, and the pilgrim's staff with which he travelled to Palestine. In medieval times of war or pestilence, the Maastricht people used to carry the chest of emergency through the streets in a solemn procession. Since 1874 there is a pilgrimage every seventh summer, called heiligdomsvaart, and then people carry the chest again in a triumphant procession. 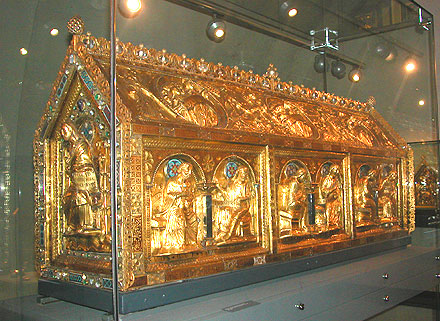 Edmond Jaspar relates in his popular book about Maastricht history how Maastricht had already used up twenty-one holy bishops when the rest of our country was still heathen and uncivilised. The best known of these saints are Servatius or Gervase, Monulph and Gondulph, Amand, Remacle and Theodard, and Lambert and Hubert. In Maastricht, many baby boys have been named after them. For example, a well-known name is Sermon (from Servatius and Monulph).
In Aachen, there is a street called Klappergasse (Clatter Alley). This name reminds us of a remarkable incident. Pope Leo III was going to consecrate the Aachen Münster Church in the presence of emperor Charlemagne and 365 bishops, one for each day of the year. Two bishops were missing. At the very last moment, two more bishops entered the church. Some attendants thought it were Monulph and Gondulph, but these two were already dead. Were they risen to sanction the holy alliance of the pope and the emperor?
Saint Amand founded several churches and monasteries, for instance in Ghent. The Merovingian king Dagobert expelled Amand because the saint had criticized the king for misbehaviour. In 647, Amand became bishop of Maastricht. His successor Remacle founded the famous abbey of Stavelot. Theodard stood up for the poor in front of the Merovingian king Childerik. He was murdered, but he is living on as the patron saint of the cattle-merchants. 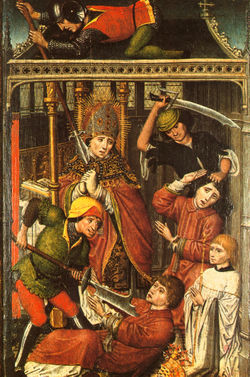 Saint Lambert was born in Maastricht. To illustrate his modesty, historians tell the following story. Lambert was a guest of Stavelot abbey, and at a given moment one of the munks made some noise during prayer. The abbot demanded that the noise-maker pray on outside in the frosty cold. Next morning it turned out it was Lambert. He had been praying in the snow all night. Anyhow, Lambert was very brave, because he rebuked the Frankish major-domo Pepin of Heristal for adultery. Just like his predecessor Theodard, he had to pay for his courage with his life. He was buried in Sint Pieter near Maastricht.
Saint Hubert was as a youngster reckless and foolish. Repentance came suddenly. It was a Good Friday. All other people were in church, but our Hubert, son of a duke, was hunting in the Ardennes. All of a sudden, a deer stood before him. It was a hart with a cross between the antlers. Hubert repented and became a disciple of Saint Lambert. Later on, when he had succeeded his master as a bishop of Maastricht, he moved Lambert's relics and the episcopal see from Maastricht to the little village of Liège near Pepin's villa. Thus, the city of Liège was to develop upon the grave of its patron Saint Lambert. 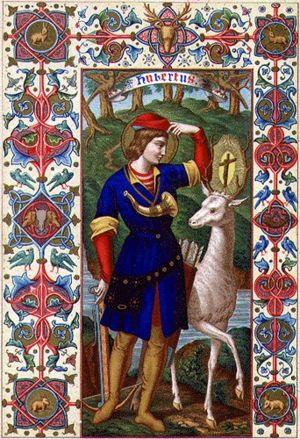 The Black Christ of Wijck

In Saint Martin's church in Wijck-Maastricht, there is a black walnut statue of Christ that has been carved in one piece. This statue has been an object of veneration since the middle ages. It originally belonged to the convent of the White Women, but after wandering about during the French era, it turned up in the Wijck parish church. Parishioners carry it along in city processions and heiligdomsvaarten. About the origin of the statue, people tell the following:
A noble from the village of Riemst, between Maastricht and Tongres, had made a pilgrimage to Palestine about the year 1300. After his return, he gave his wife and children presents, but he had forgotten his 'silly' daughter Anna. So he gave her a nut that happened to fall in his bag somewhere in the Holy Land. The girl was very glad with it. She planted the nut in the garden next their house, where it developed into a tree. One day there was a heavy thunder-storm, and lightning cleft the walnut tree in two pieces. The girl now perceived the Black Christ, and she told the people in her own medieval local dialect 'that in the middle of the tree there stood a fine cross with the figure of Our Lord'. She entered the convent of the White Women in Maastricht, bringing her miraculous cross, which did great miracles by dispensation of Providence. 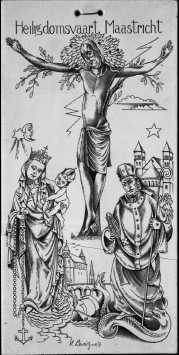 Maastricht people don't know the bible by heart, as some Protestants do, but they know the outlines of Jesus' life. They learnt them through the gospel of sunday mass, through numerous depictions in processions and open air plays, through works of art in the churches, and through the simple crucifix at the wall. It's virgin Mary who may best lead them to Jesus, who's both the light of the world and living water.
Jesus appeals to their best feelings, so that they may reconcile with their teasers, and liberally give away what belongs to themselves. They know Jesus is alive, because Jesus appeared to the apostles after his resurrection and had somebody say to Mary Magdalene "Why do you seek the living one among the dead?". They see their own life in a wide perspective, because Jesus said to Pilate: "I am a king, but my kingdom is not of this world". And they trust their parish priests, because, like the walkers to Emmaus, they recognise in them Jesus "when he is breaking the bread".
There is a certain light-heartedness in the way Maastricht people go about with their faith. It's analogous to the light-heartedness in the way they go about with Maastricht historical heritage. As Catholics, they are seeing so much earthly and spiritual riches in faith that they can't imagine their contribution is very important. They don't over-estimate their contribution to Maastricht historical riches, either. They consider both kinds of riches gifts from Our Lord. 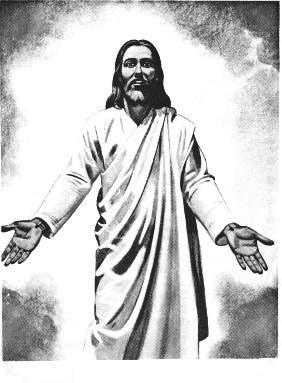