In Crux Mathematicorum I found the following problem, attributed to Sir Isaac Newton:

My solution runs as follows:

Mum, I fear I might nevermore
be clever, sharp and smart,
although searching further knowledge for
to get decimals will reward.

Sqrt(n) in more decimals than the calculator gives

(7 July 1999:)
On my birthday I stand you some little roots: a recipe to have the calculator quickly calculate square roots of natural numbers (which should be not too large) in about twenty signifiacant figures.
The problem is that the calculator gives only ten figures. The solution is: you do one step Newton-Raphson to approach the positive zero of f(x) = x2 - n , with as a starting point the outcome x0 for sqrt(n) which the calculator gives.

As you know, the formula of Newton-Raphson is

So the recipe becomes:
1) Calculate sqrt(n) with the calculator, this is x0
2) Calculate on a piece of paper x0/2 and 2x0
3) Perform the division algorithm you learned on primary school to calculate the first twenty figures of
(n times a billion)/ (2x0 times a billion);
for this, use the following little BASIC program (or a PASCAL variant or ... )
4) Now calculate on a sheet of paper x0/2 + n/(2x0) in twenty figures. This turns out to be a matter of copying and a little attention about the tenth figure.

Enjoy your meal. For ruminants: why is it impossible to approach in this way cubic roots in twenty figures?

In the magazine Nieuw Archief voor Wiskunde (New Maths Archive) of june 2001 you can find the following open problem:
A billiard table has the form of a regular pentagon with side 1. Lay a billiard-ball anywhere on the table and cue in any direction. Suppose it rolls to a distance 10. What is the maximum number of times it hits a side of the table?

Answer: I did several tries with Cabri, and FOURTEEN turns out to be optimal. Here is an example of such a try with fourteen hits:

On a large planar grass-field two pins are in the ground a distance d apart. To each of both pins a goat is bound with a cord of length rg and one of length rk respectivily (rg > rk), and rg < d < rg+rk (so the goats can touch each other but not the other's pin). 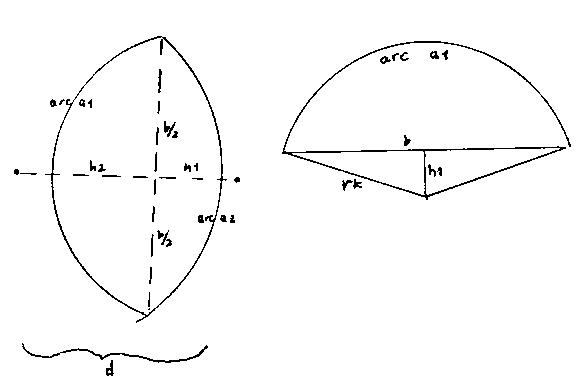 The fraction of time that both goats are grazing in the domain of conflict is:
the product of opptot/(pi*rk2) and opptot/(pi*rg2).
The probability of confrontation is directly proportional to this product divided by opptot, so to
(a1 - sin(a1))/(rg2) + (a2 - sin(a2))/(rk2) as well.
In the following little Pascalprogram, we calculate this last expression with
rk=10 and a series of values of rg and d:

You can see the results by clicking on results.

It turns out that the probability of confrontation is maximal when both cords have approximately equal length and the distance between the pins is sligthly less than the mean of rg and rk+rg.

A generalisation of the proposition of Morley 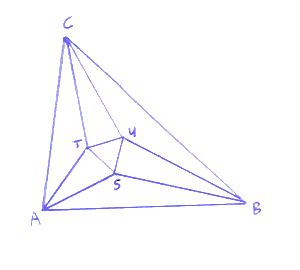 Given an arbitrary triangle ABC. When you draw in each angle the three trisectrices, and you take near each side the intersection point of the two trisectrices that are closest to that side, then the three intersection points are the angular points of a regular triangle (see NIEUWE WISKRANT, sept 2001).
I wondered whether this is true as well if I divide the angle in n equal parts with n>3 instead of three equal parts. If I take near each side the two n-sectrices that are closest to that side, is it true that the three intersection points are the angular points of a regular triangle?
Of course this is true if the original triangle is regular. But in other cases?
I calculated the outcome with vector geometry. Take A(0,0) and B(1,0). Suppose that the angle at A measures a degrees, and at B b degrees (a and b integral and ranging from 1 to 89, so 7921 pairs). For each n from 3 to 10 I calculated with the computer for how many pairs (a,b) the triangle STU is (almost) regular, taking into account rounding errors.
The norm is that each pair out of the three lengths of line segments ST, SU and TU differ less than epsilon. If eps=0.0001 I get for n=3: 7921 pairs, and for n=4 t/m 100: 1. This seems to indicate that it is only true for n>3 if both a and b are 60 degrees.
See the pascal program .
With an adapted version of this program, I derive for n=3: the ratio of areas of the STU and ABC is at most 0.03414828, this maximum occurs when the triangle ABC is regular, and this ratio approaches 0 if the area of ABC approaches 0. Of course, this can be proved in an analytical way. The center of the inscribed circles of ABC and STU do only coincide if ABC is regular.

The set of algebraic numbers is enumerable and therefore has measure 0.
So almost all real numbers are transcendental. Nevertheless, it is rather difficult to give other examples of transcendental numbers except algebraic expressions in pi or e.
To begin with, we have the proposition of Liouville, and accessory examples like SUM(k=1,2,3,...: 10^(-k!)) = 0.11000100000000000000000100..
We get another nice example by constructing an enumeration of the algebraic numbers in (0,1), and applying the Cantor diagonal procedure on this enumeration.
I did this with the help of an enumeration of the rational numbers that begins with q1=0, q2=1, q3=-1, q4=2, q5=-2, q6=1/2, ... , and an enumeration of the polynomials with rational coefficients which enumerates (in lexicographical order) first all polynomials with degree 0 (or less) and coefficient q0, then all polynomials with degree 1 (or less) and coefficients q0 and q1, then all polynomials with degree 2 (or less) and coefficients q0, q1 and q2, etc.
If I enumerate the algebraic numbers of (0,1) in order of their occurring as a zero of a polynomial in the list of polynomials mentioned above (zeroes of the same polynomial in order from small to large), and apply to the so-constructed list a1, a2, a3 ... of decimal representations of algebraic numbers the Cantor diagonal procedure, then I find the reuvers transcendental number rtn with n-th decimal equal to an(n)+1(mod 10). This number begins with rtn = 0.71.. (I have not yet calculated more decimals).
Notice that this number is most probably not an algebraic expression in pi or e (because these expressions form a set that is enumerable, so with measure 0).

When somebody draws a triangle, what is the probability that the triangle is acute-angled?

First solution: choose three times an arbitrary point in the plane. The probability that the third point is thus situated with respect to the other two points, that the triangle formed by these three points is acute-angled, is zero.

What is your opinion?

About a bullet and a cube

Suppose someone shoots a small bullet through a face of a large cube and the bullet leaves the cube through another face. What is the probability that these two faces are opposite faces of the cube?

For this problem I wrote and ran the following Pascal program (using coordinates such that the opposite faces are y=0 and y=1):

Looking for new triangles with integral side lengths a,b,c and vertices with integral coordinates, I took A(0,0), B(c,0), C(p,q), and demanded (p,q,b) and (p-c,q,a) be pythagorean triples.

I wrote and ran variants of a Pascal program with the following pith:

I found the expected rectangular triangles, but also unexpected ones like

When solving a maths problem, it often occurs that we "smell" the solution, like a hound that smells a hare; but we can't catch it at the same time.
And yet, the answer seems so simple afterwards.
That makes me think of the words of Saint Paul: " .. that they might seek God, if perhaps they might grope for Him and find Him, even though He is not far from each one of us."