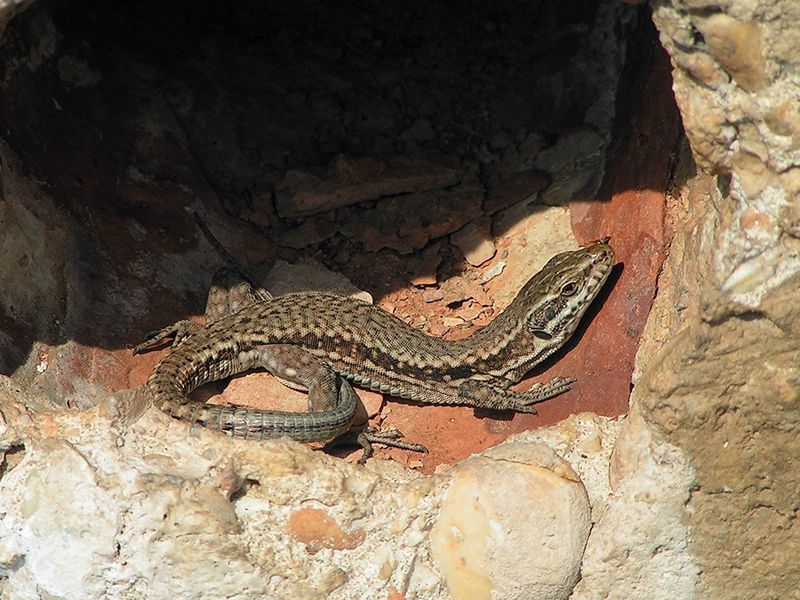 THE MOSASAURUS OF MAASTRICHT

North of old Maastricht there is, since the eighteenth century, an extensive system of military defence works, which common people usually call the casemates. You may join a guide and visit the subterranean passages and bombproof rooms. Furthermore, you can freely wander through the part that's lying in the open air. They make up a very special environment for plants and animals, with a microclimate of its own. When you're walking over the earthen ditch walls, reveted with bricks, you often see sheep grazing in the dry ditches beneath. The bricks on the walls are even more interesting, because there the wall lizard is living, which doesn't occur anywhere else in the Netherlands.
I always found lizards grisly little beasts, because they throw off part of their tails without any health problems. According to my encyclopedia, the infamous crocodiles that use to jump out of a river to swallow you up, are rather closely related to lizards. The same holds for the dinosaurs, which we're happy never to bump into any more. However, you may still make acquaintance with a large prehistorical lizard in Maastricht. I mean the wellknown mosasaurus in the museum of natural history. Workmen found the fossil skull of this gigantic beast in the marl of the mountain of Sint Pieter, south of the city, and digged it out. This happened to occur about 1770, about the same time when other workmen were constructing the casemates.

The finding of the Big Beast

It wasn't the first time people found fossil remains of the mosasaurus in the marl near Maastricht, nor would it be the last time. But the skull that workmen found in a marl pit of the mountain of Sint Pieter, at a distance of five hundred meters from an entrance, was so whole that they called for a doctor to see it. It was dr Hoffmann, after whom the animal was later on formally named mosasaurus hoffmanni. Now one canon Godin owned the landed estate Maeszicht, facing the river where nowadays there is a Lourdes grotto. He claimed the beast for himself because it had been found on ground he possessed, and exhibited it in a cottage next the river Maas. In those days, there were already amateur geologists who could rather exactly determine the species the animal belonged to, for example a certain mr Camper and his son. According to the father, the beast was a finfish, and the son identified it later on even more accurately as being a kind of monitor lizard.
When the French revolutionary armies were besieging Maastricht in 1795, rumour had it that the French had a special interest in the skull of the beast. Therefore, father Godin hid it in the town. There's a story saying that one Freichine put up six hundred bottles of good wine for the person who was to smuggle the fossil into his hands. Allegedly, twelve grenadiers triumphantly turned up with the head next day. So, anyhow, some members of the French garrison robbed Maastricht of the skull of the mosasaurus in 1795. It ended up in the Paris Museum of Natural History. Later on, local musea in Leiden and Maastricht got a fine plaster cast.

We want to dwell on the question how father Godin (or Godding) could lose the skull to the French. He did put the head away from them, but apparently in a halfhearted way. It looked as if, in fact, he was willing to get rid of the thing. Why should he act like this? In my opinion, the key to this secret is the fact that the canon was a member of a local club of the freemasons, called 'de Groote Sociëteit'.
It's evident there were enlightened persons in Maastricht, for example Camper and his son, who knew that the chalk of Sint Pieter's mountain was a remnant of a former sea. Otherwise, they could never have been thinking that the skull might have belonged to a finfish. Although the theory of evolution wasn't in vogue yet, some people did reckon with the possibility species could become extinct, for example after some worldwide disaster.
Canon Godding was in a condition of mental conflict. As a member of the Church, he was supposed to propagate Catholic standpoints, but as a member of the enlightened freemasons movement, he had to be progressive. Now Rome was at a loss what to do with the beast, because, if the world had been created six thousand years ago within one week, how could this beast end up in the mountain? In de Groote Sociëteit, people would discuss this sort of problems, and probably somebody said the fossil should be examined in Paris. 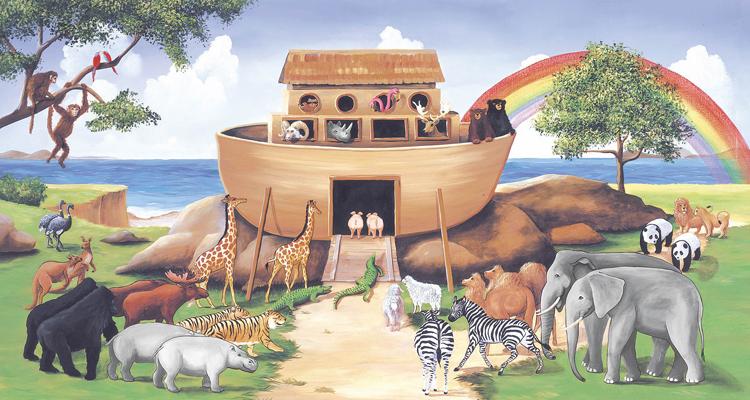 In Paris there was a sandy-haired geologist, whose real name was Kuefer, but who gave himself the French name Cuvier. A well-known legend relates how one of his students was hiding behind the skull of a billygoat at night and woke him with the words: "I'm the devil and I'm going to devour you!", whereupon Cuvier answered: "I venture to doubt that, for I see by your horns you belong to the herbivorous animals". This man identified the late beast of Maastricht as a gigantic lizard. This turned out to be true, because, according to the library books about dinosaurs, the mosasaurus developed from carnivorous lizards. In the warm maritime environment that was then prevailing on earth, the paws evolved gradually into fin paws. He moved through the water by squirming like an eel. He continously changed teeth, to be able to bite so much the better, and fed on sharks as we ourselves eat herrings.
To be precise: the animal belongs to the class of reptiles, order snakes and lizards, family mosasauridae. Next of kin in our present world are the monitor lizards. However, these are very small compared to their famous great-uncle. Although the komodo monitor may become as long as three meters, this is only one third of the length of the mosasaurus. The flowering period of the Maas lizards was during Upper Cretaceous, about seventyfive million years ago. Then it lasted only ten million years before all dinosaurs had become extinct in a relatively small interval of time. The desastrous period in which this happened, is known in geology as Maastrichtien.

How could it happen that the dinosaurs disappeared from the face of the earth? There exist several theories about this. According to Cuvier, who thought the species were unchangeable in principle, they died out during the Deluge (Genesis, ch. 6-8). Because of this opinion, we may range him among the modern adherents of catastrophe theory, together with some real evolutionists. However, the evolutionists don't consider the bible story about Noah, but rather the strike of a large meteorite in Mexico, which blew up so much dust that the sun rays couldn't reach the earth during a long time. It is also possible that an exploding supernova exposed the earth to an overdose of cosmic radiation.
The newest theories follow a different scenario. During Cretaceous, the continents, which were originally connected in Pangea, began to drift asunder. Rocky mountains appeared. In the end the sea level decreased, and our present climate zones came about. The dinosaurs couldn't stand all these big changes, although some scientists think they were warmblooded. By the way, it is quite possible that the big transformations of the biosphere, so even apart from great and small ice ages, have a periodical character again, and are related to the motion of our solar system through the milky way. The earth is now four-and-a-half billion years old, so in the next billions of years there may still be something in store for us. 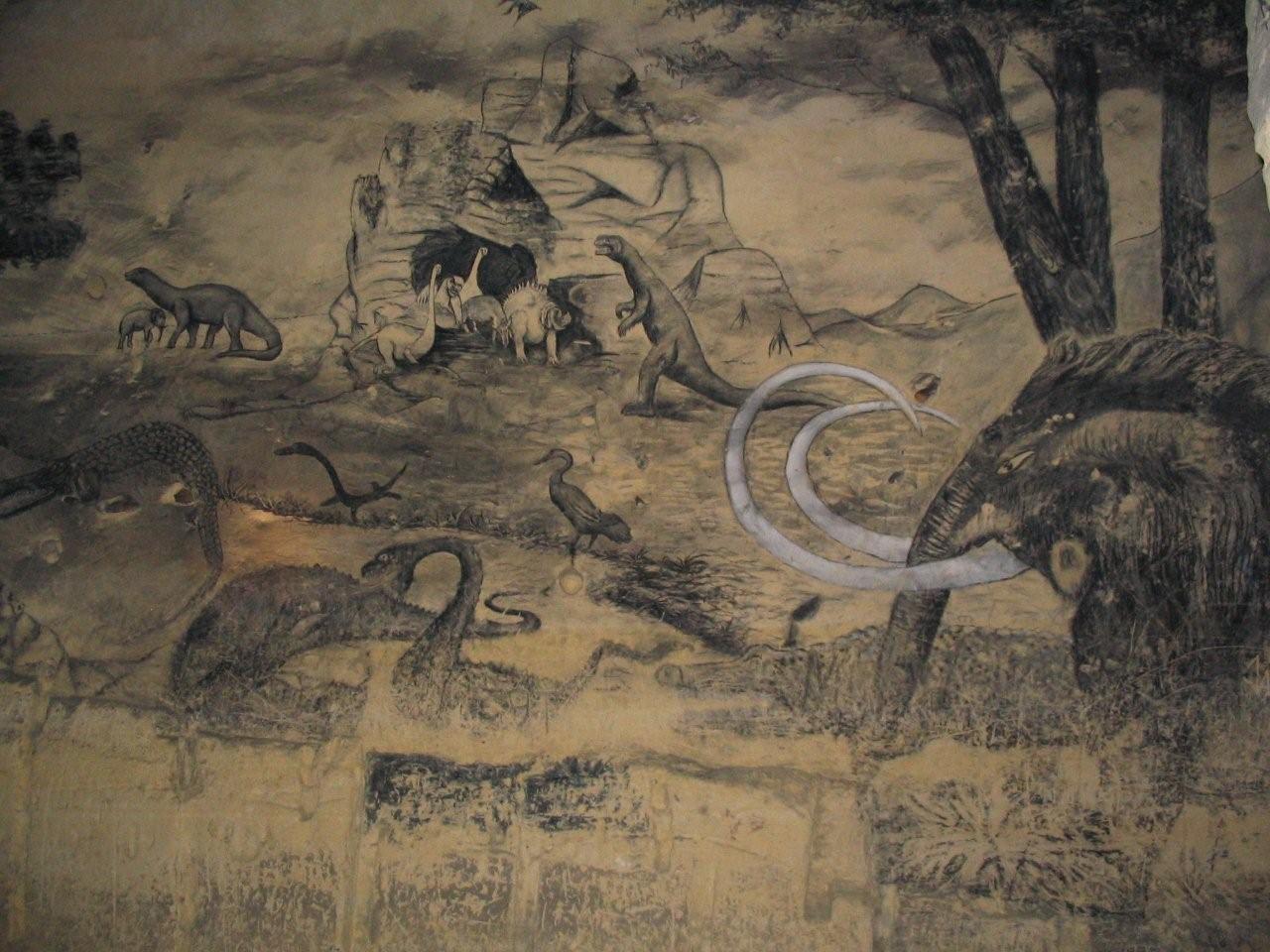 I humbly realise that it was only 250 thousand years ago when people settled in our regions for the first time. This happened to occur where now the new Maastricht city district Belvédère is about to be built. Maastricht is very young compared with the age of the earth. Let us imagine the Romans came strolling along only two hours ago instead of two thousand years. Then the Belvédère people arrived a good ten days ago. Then the mosasaurus is extinct since eight years, and the earth is five hundred years of age.
Speaking of a stroll, that is as pleasant on Sint Pieter's mountain as with the casemates or in the valley of the meandering river Jeker. You may join a guide to visit the subterranean marl pits. There you see many inscriptions, charcoal drawings and sculptures. It is also a pleasure to drink a cup of coffee on the terrace of châlet Bergrust or on fort Sint Pieter. There you have a view of a multitude of towers in the valley of the river Maas. Farther on the plateau there is a forest, where you have to initially follow the paths sloping upwards to eventually arrive at the Albert canal beneath.
Another time, you may walk along the vineyards and cornfields, or through the sunken road to the upper church of Sint Pieter. Light a candle in the Lourdes grotto. Pray for the preservation of our environment, and especially the mountain that machines of the cement factory are still excavating. And realise there has been here, in pre-prehistorical times, a sea in which not only the mosasaurus was swimming, but also countless other animals whereof the mountain is preserving the fossil remains.

"Ber", a specimen of a new species of mosasaur, Prognathodon saturator. He was found in 1998 in a nearby quarry, and transferred to Natuurhistorisch Museum Maastricht.
Read everything about him on the website nhmmaastricht.nl.