Here you see my son Frank as a toddler on the beach in Zandvoort. Of course, his two elder brothers were there, too, but his younger sister wasn't there yet. His parents were already proud when they had three sons, leave alone when the little girl joined the party.
Frank often made genuflections in the box while watching his wanton little brothers. When the box could no longer stop him, he left his bed too often at night, until we had a Moroccan visitor and Frank thought it was Swarta Pete.

Short before Frank's parents moved from Eindhoven to Maastricht, his grandparents moved from Maastricht to Heerlen. That's why the grandchildren on the picture look a bit annoyed.
Frank had in Eindhoven been a pupil of the medical toddler's school Tomteboe, but in Maastricht he went to the same primary school as his brothers and sister, and he was doing fine.

When Frank was about ten years of age, his convulsions were too frequent to ignore. His parents placed him in Bilthoven in an antroposophic clinic where he received lessons in painting and wrote some beautiful poems.
From this clinic he got assistance before and after an operation in the Utrecht Academic Hospital to remove from his head a tumor as big as a tennis ball. Thereafter he went to school in Maastricht again. 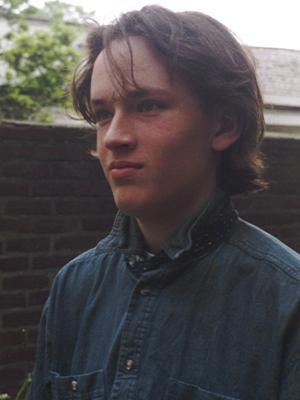 Here you see Frank as a fourteen year old boy. In these years he stayed at Kempenhage in Heeze. There he did the bridge class and got some prolonged education. He worked at atelier Kempro, too. Among other things, he made some fine etchings.
In de weekends his parents joined him, or they took him home for a nice stayover. Once he couldn't stop laughing when he learnt that an artist spitted before paintings to express his feelings about the painting, with spit of an appropiate colour. 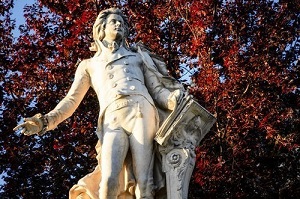 Frank loves the music of Mozart. He has been in Salzburg with his parents and his eldest brother. There they heard a concert, and now Frank knows everything about his favorite composer.
He also knows much about dinosaurs, wild animals, Greek mythology, knights, etc. His mother gives him a nice book about one of these subjects every now and then. But he also likes strips like Donald Duck and Spike and Suzy. 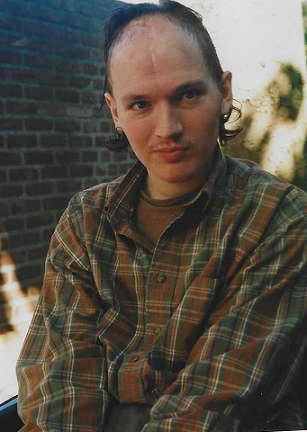 While waiting for a more permanent home, Frank was welcomed in the wellknown nursery house Klevarie, within walking distance from his parents. This way he could stay with them every night.
The other patients in Klevarie were glad there was a young fellow among them to talk with, because the eldest, a vivid lady, was already more than a hundred years old.

Then Frank found his own place in Maastricht at Maasveld. Here were some ten cottages to live in around three central little buildings for administration, paramedic assistance and activities. There were also a little chapel and a little farm.
This farm contained a number of gardens, a playground, and many animals, among which a horse. On Sunday afternoons, the inhabitants and visitors gathered there to talk and drink coffee. 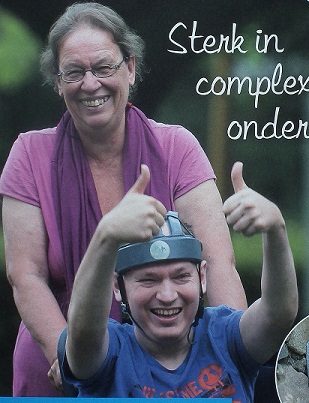 From the cottage he lived in, my son Frank would step into the garden on sunny days to tidy the grass, or walk to the center of activities with some employee. In case of bad weather he liked to paint or read a book.
Of course the Maasveld people did celebrate the big feast days together, like carnival and Sinterklaas. Every summer there was a feast at the farm with loud music and a Maasveld market. But his parents often picked Frank up to come home for the afternoon.

Since a very long time, one of the Maasveld patients was Frank's grandniece Marie-Louise who worked there in the bakery. The first time we saw her there, she was carrying a big pan of hot soup over the terrain.
Of the Maasveld people we saw on Sundays, we have to mention: Barbara, who would always ask for chewing gum, Bert, who would always kindly invite us on many imaginary occasions, Irma with photos and a piece of soap, and John with the shawl of the local football club MVV.

During the 2020 pandemic, almost all activities were slowing down, but the new construction and design of the terrain were completed. We hope there will be brilliant activities on the central place again.
What will future bring? Will Frank go abroad once more? He has already been in Paris and London, and in several towns in our province of Limburg. But there are also nice places to walk to close to Maasveld.

In the summer of 2021, Frank got pneumonia and his condition was critical. The doctors already planned palliative care, but his mother cured him with the help of alternative medicine.
However, in the autumn, corona reached Frank and his house mates. We weren't allowed to enter his house anymore, except in protective clothes. He died with corona on the 8-th of December.
About forty guests attended the beautiful funeral on the 14-th of December, among whom six employees of Maasveld.