Judge of me, o God, and distinguish my cause from unholy people.
Free me from all who are hostile and deceitful.

Hebrew psalm, sung every day before Mass at the foot of the altar, until the second Vatican council

How can a teacher and priest decide to become a politician? Maybe because he has a sense of responsibility, and nobody else is ready to do it. That's how it was in pre-war Slovakia. When Andrej Hlinka, father of the nation, became old and tired, there had to be somebody else who could save the traditions of the beautiful mountainous country.
Dr Jozef Tiso (1887-1947) was a brilliant student and, later on, a hard worker. He was a teacher of Slovak language, a school director, an assistant-bishop, and always a parish priest. I think that he was a bit more impatient and narrowminded than Andrej Hlinka. Hlinka could endure many hardships, and walk counter to the wind. The many contrarieties had made him wise and mild. Tiso, however, was becoming mature in a Roman-Catholic Slovak cultural atmosphere that was already getting rid of hungarianisation. But, seeing the troublesome emancipation of the Catholic Slovaks, or the struggle of the Catholic peoples in the Balkan region, he considered the fight for Slovakia as a main task in his life.
As a politician, he stood with Hlinka at the cradle of the nationalistic party. Together they tried to accomplish the emancipation of the Slovak people from the Hungarians and (later on) the freethinking Hussitian Czechs. In the interbellum, Tiso was minister of health and sport in Czechoslovakia. After Hlinka's decease in 1938, he became the new leader of Hlinka's popular party.

How can an industrious and moderate administrator decide to cooperate with Adolf Hitler? To understand that, we must first realize that Tiso didn't know the holocaust beforehand. In the beginning, it seemed to him that Hitler was a quicktempered person who couldn't stop his followers from ruining the panes of Jewish shopkeepers. But, like Hitler and many people in those years, Tiso feared the large band of immoral Slovak Jews with their financial manipulations. He also feared communism with its theory of materialism and class struggle. He feared liberalism and excessive democracy, which would bring egoism, degeneracy and anarchy. And of course, it didn't last long before he feared Hitler just like a mouse who is afraid of a cat.
In 1938 and 1939, much happened in a few months. Hlinka died. Hitler easily got round England, France and Italy in München, and took Austria and the German parts of Bohemia 'back into das Reich'. Hungary and Poland took bits out of Slovakia, and Hungary and Germany were ready to completely eat it up. When the Czechs occupied Slovakia, Hitler had the deposed leader Tiso brought to Berlin, and made him choose one out of two possibilities: either Slovakia could proclaim its independence under the protection of Germany, or Hitler would allow the neighbouring countries to devour Slovakia. Tiso made a telephone call with his comrades at home, and the Slovak parliament chose 'independence'.

Tiso began with setting up the new Slovakia according to Catholic corporate principles, much like Portugal, Austria and Italy in those years. He was masterful, but that wasn't exceptional in that time. The parole was everywhere 'for God and fatherland'. He really thought that most Catholics were better than Protestants, leave alone Jews and gypsies. He endorsed the prevailing racial theories. But he opposed fanatical antisemitism and nazism, although he was not really allowed to irritate Hitler. As a Catholic, he didn't want to allow ill-treatment of any human being. Being a priest, his natural intention was to guide the souls of both Jews and Christians to heaven.
However, the protection by Germany had a very high price. Slovakia had to fight with Hitler against Poland, which denied to Germany a corridor to East-Prussia. Hitler personally settled the discord between Tiso and the fanatics Tuka and Mach, giving the fanatics relatively much power. He maintained Tiso in power only to prevent unnecessary unrest among the people of his model satellite Slovakia. Slovak industry had to be set up in such a way as to produce war goods for Germany. But it were these two fanatics Tuka and Mach, who, with the help of the 'Hlinka guard', prepared the expulsion of Jews to labour camps in Germany and to a homeland of their own in Poland.
Most catholics agreed that those Jews should now learn to work for other people. That would also be good for the eternal salvation of their souls. But Tiso asked his bishop whether, in these circumstances, he should stick to his office or not. Since the bishop declared that he should stay, to prevent a further worsening of the situation, Tiso's presidency was henceforward a matter of mere obedience.
From March to October 1942, there were quite a few deportations of Jews. In the beginning, only healthy men without occupation were sent away, later on there were family deportations. Tiso cared in his own way about the wellbeing of Jews in concentration camps, both in Slovakia and abroad. He gave many exemptions to indispensable and baptized Jews. When he heard persistent rumours about criminal treatment of the Jews, he managed to stop the deportations in spite of Nazi protests. Slovakia became then a last refuge for Jews from abroad.
Tiso had much support among the Catholic Slovak people, but not among the communists, who were preparing an insurrection.

In 1944, when war was already approaching its end, communist Russian armies stood at the borders of Slovakia. A communist rebellion took place, and the Slovak president helped to crush it. Germans occupied Slovakia. These Germans began to organise new deportations of Jews, and Tiso couldn't stop them any more. After the war, he was arrested by Americans in Germany. The Americans handed him over to Czech leaders, who were heavily influenced by the Russian communists.
The Czech president Benes, returning from voluntary exile in England and being backed up by victorious Americans and Russians, allowed and helped his fellow countrymen to violently throw all Germans, three million innocent people, out of Czechoslovakia! At the same time, many communists and Jews called Tiso (and Hlinka) 'clerofascists', and blamed them for all wrongs that had been done to the Jews. Whoever opposed this opinion, was called a fascist himself. After a show trial, the Czech leaders had Tiso hung within a few days after his sentence.
The domination by communists in postwar Czechoslovakia was as bad as the domination by Germans during the war, and the communist supremacy lasted longer. Now, Slovakia is free at last, and we can think again about Jozef Tiso. That's what I did.
I am quite certain that Tiso didn't deserve a death penalty. He was constantly under big pressure, couldn't change the situation, had a judgment of it that was different from our judgment, and always tried to make it a bit better.
Let us forget racial differences, bring wisdom and prosperity everywhere, catch criminals, and abolish the death penalty. 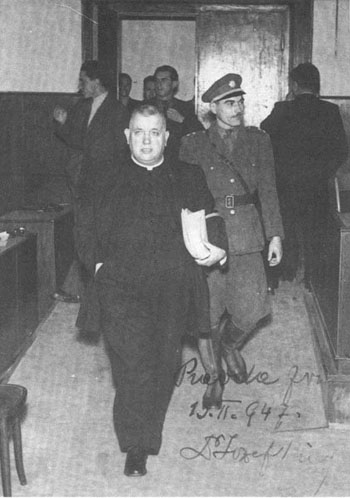 I'm glad that the second Vatican council wished to abolish narrowmindedness. But it's a pity that it somehow (primarily by the neglect of thomism and tridentine Mass) abolished the visibility of heaven as well.

(You can find a lot about Tiso on the web and in books. Whenever the article or book is against him, he is simply described as a clerofascist in a few suggestive words or photographs. See for instance the pseudo-scientific book by Daniel Goldhagen. Pro-Tiso literature is much more elaborate. For example, see churchinhistory.org. See also my translation of a book about Hlinka in petericepudding.com.)